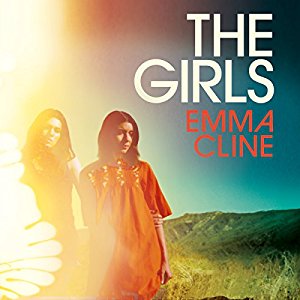 Imagine being in a desert, the beads of day-old sweat clinging to your body, inching down your back and dampening your clothes. The heat rising from the dirt, causing a haze over the horizon even though it’s only mid-morning. Your hair slightly matted, dirt and sand under your fingernails. Your throat dry, croaking.

That is what The Girls instantly brings to my mind. Not an image, but a feeling of being parched and withered from the sun. Slightly dirty, sweaty and breathless.

The Girls is set in 1960’s America, a fiction based around the cult formed by Charles Manson and the Tate-LaBianca murders. It is both a coming of age story and a horrifying tale of psychological vulnerability. The novel centers around Evie, a young girl whom is hoodwinked by the glamour of freedom, fuelled by an ideology of sex and drugs.

But it is not quite the tale you’d expect from a naive teenager, aching to be accepted. Her fixation is not with the cult leader, but one of his associates, Suzanne. At first I thought Evie’s obsession lay in her wish to be loved by her family, wanted by her friends and, like every teenager, to be desirable by her peers. Ultimately, I thought Evie was just an ignorant selfish teenager like many others; having arguments with her parents, not doing chores round the house, finding a reason to rebel.

Evie’s obsession with Suzanne deepens quite rapidly. At first it seems like a sexual awakening but you have to read between the lines; it is much more than that. Evie relies on Suzanne – without Suzanne she would not have been accepted into the group in the first place let alone achieve a high place within it. She yearns to be like Suzanne in every possible way, to gain praise from her and each touch is like a prize in itself.

The Girls brilliantly depicts how a seemingly ordinary teenager could so easily succumb to such a way of life. Whilst the grooming is clear throughout the novel, it is gradual to the reader due to the way the narrative is structured; jumping from present day and back again with recollections interspersed throughout. The brain-washing seems to be of Evie’s own doing though – if I am even allowed to say that. She recognises from the outset all that is wrong with the group on the face if it; the rotten environment, the unwashed bodies and clothes, the ‘tangy breath’ and children roaming wild across a rubbish-strewn site. She sees first hand the poverty they are living in, the crimes they must commit to maintain their existence, but she makes excuses for it. By the closing chapters Evie is accepting of it; she judges a newly found friend for seeing what the group’s situations really is – dire – and dismisses him in case his association rubs off on her.

Evie is of course a fictional character but her ‘experiences’ have been watered down somewhat. Perhaps so as to gain the reader’s sympathy, or perhaps Cline was worried that some may be unable to finish her work if it was too dark and true to the actual events.

I have ignored until now the other character in this book, not Suzanne but the cult leader Russell who is fashioned on Charles Manson himself. Whilst the real Manson was extremely manipulative and used his followers to commit all manner of sins, as well as physically, sexually and psychologically assaulting them himself, Russell does not have that harshness, and that is something that I think I lacking in the novel. The novel concludes with several murders, committed by Suzanne and other followers, but their desire and vacant acceptance of their instructions by Russell has not had time to manifest in the reader. In short, I felt the murders themselves to come out of nowhere and lacked any foundation. This may have been Cline’s intention all along so that the reader was side-tracked by Evie’s wanton desire and fixations but at some level I would have preferred to have had Evie observe Russell’s treatment of the others in a more stark and violent manner so as to understand Suzanne et al’s motivation for committing the crimes they did. I, of course, do have an imagination and can fill in the blanks for myself, but when a novel is based around true events I feel it is for Cline to bring the shock factor and show readers what is must have been like in that cult.

Overall, The Girls is beautifully written and really instills feelings of teenage curiosity, hope, frustration and obsession in the reader which makes it a real page-turner.

2 thoughts on “Book club: The Girls by Emma Cline”